What do your EICR codes mean? 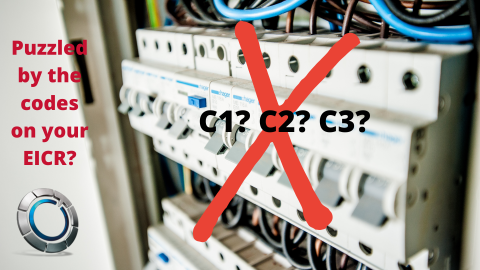 Our electricians at Definitive Electrical provide electrical safety inspections across Nottinghamshire and Derbyshire week in, week out. Whether to aid a house sale or to assist a domestic landlord in adhering to safety regulations, these inspections check whether the electrics of the property are safe for those who live in or visit the property.

After the inspection, our electrician will provide a report – an Electrical Installation Condition Report (EICR), which will rate the electrics as either ‘satisfactory’ or ‘unsatisfactory’. This report will also provide greater information on various aspects of the electrical inspection and its safety (or otherwise) will be recorded using the following codes.

EICR Codes and Their Meanings

During an inspection, the electrician will note any faults that they discover, and these will appear on your report with the following classifications: C1, C2 or C3. These codes are used to explain how serious these faults are.

C1 faults are considered to be immediately dangerous. This means that there is an immediate risk of injury or death to anyone using the electrics and as a result, immediate action needs to be taken to make the electrics safe for use.

One of the most common reasons for a C1 fault is that the electrician has found exposed live wires, which pose an immediate risk of electric shock.

These faults are a step below C1 faults. Whereas a C1 fault is considered to be so dangerous that anyone using those electrics could be at risk of an electric shock at any time, C2 faults are considered to be potentially dangerous. This means that while they aren’t actively dangerous right now, they are likely to become so in the future and remedial action is required to make sure that they don’t become dangerous.

Examples of C2 observations are unsuitable electrical items such as pendant light fittings in a bathroom, or damaged items like sockets or switches that aren’t currently exposing live wires but could do so in the future. Other C2 faults include an absence of earthing or protective bonding as well as the lack of RCD (residual current device) protection on sockets, which protect against fatal electric shocks if you should accidentally touch a live wire.

C3 observations on EICRs are recommendations rather than actual faults. They highlight areas where the current electrical installation doesn’t comply with current safety standards. They aren’t considered to be dangerous, either immediately or potentially, but rectifying them would improve the safety of the electrics and bring them up to modern electrical standards.

A common C3 example our electricians see regularly is a plastic cover to a consumer unit or distribution board. Whilst these are acceptable and won’t lead to the electrics being considered to be ‘unsatisfactory’, metal consumer unit covers are considered to be much safer these days and are recommended due to their superior ability to withstand and prevent the spread of fire.

If you fear your electrics might contain a few of those C1 or C2 examples, give Definitive Electrical Solutions a call and get booked in for an EICR. Our electricians will provide a thorough inspection of your electrical installation and the condition report will highlight any areas where your electrics could be endangering you and your family, as well as recommendations to make them even safer.

We treat you with respect, understanding and explain everything every step of the way

You can rely on us to turn up when we say we are going to!

You can be assured to trust us in your home or office for your piece of mind.